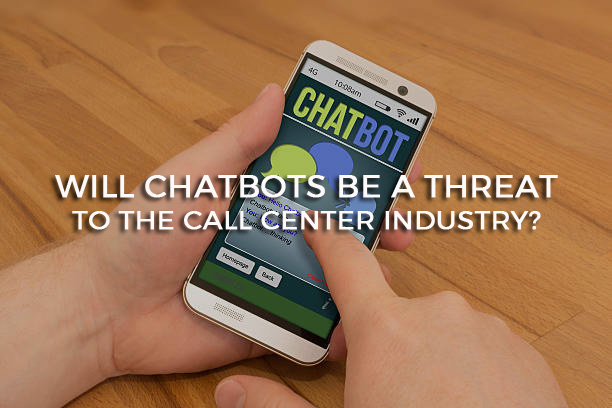 The booming industry of call center service in the Philippines and India has recently taken its toll towards the rising innovation of customer service. Definitely the deployment of chatbots in customer service makes the service much more efficient, seamless, and convenient for customers, thus huge companies have now implemented this in their brand to attract new customers and of course, take care of their loyal customers – globally.

With this in mind, will chatbots threaten the services of the call center industry? Here’s a few things to ponder to weigh the possibility.

What is a chatbot?

A chatbot is simply a conversation robot powered by artificial intelligence, and is used to address concerns from users which may vary from functional to fun type of conversations. Most likely, they would appear as voice mails or chats which may include Apple’s Siri, for an instance.

How do chatbots work?

There are two particular types of chatbots based on its functions: (a) a chatbot based on a set of rules, and; (b) a chatbot that uses machine learning.

A chatbot based on a set of rules only works for a set of rules, this means that if you ask something beyond the program – definitely, it wouldn’t be able to decipher what you mean. Basically, there are only specific commands that it can respond to.

A chatbot that uses machine learning, on the other hand, is powered by artificial intelligence. Thing is, it understands human language, and can respond to you without being too specific with your concern. Furthermore, the more it interacts with people, the more it gets smarter as it learns from those conversations that it has with the users.

Where did chatbots came from?

If you are familiar with Alan Turing, the Father of Computer Science, you would definitely have an idea with the origination of chatbots. For starters, computer scientists Alan Turing and Joseph Weizenbaum have both envisioned computers communicating like humans, thus artificial intelligence, during 1950’s and 60’s. During that time, experimentation on the Turing Test and invention of the first chatterbot Eliza were both made.

Alan Turing developed the Turing Test in 1950, of which it was basically an attempt to test a computer’s ability to distinguish human from a machine to be defined as “intelligent.” The most standard interpretation of the test was that there are three key players; player C which is the interrogator, which will have to determine which of players A and B is the human and the computer. However, player C is limited to using questions to make its guesses. This test, though it did thrill the users, however still lack on some points due to the basic coding. A reversed form of this test fortunately, is being used all over the internet nowadays, which intends to determine whether the user is a machine or a human – which you would know as the CAPTCHA.

However, the desire for artificial intelligence did not stop there. In 1966, the first ever chatterbot was born of which was called Eliza. Eliza was programmed as a therapist, ran with only 200 lines of code, and interacts with humans to converse with them. Due to its genuine, emotional responses, the users almost mistook her for a human, though most are particularly aware that it is a machine. However, similar to the Turing Test, while the program has proven that artificial intelligence is possible, it was still lacking for anything than a short conversation.

In the present time, sometime in 2016, chatbots were finally introduced to the real world. In consideration of the users’ convenience, companies like Facebook allowed developers to create chatbots. Basically, these chatbots address the users concerns from within the messaging platform to avoid further navigation as moving to a browser application just to reserve a table for an evening’s dinner.

Why would businesses need a chatbot?

Now, the question falls into this: why would a business need a chatbot? Evidently, humans are much more genuine and has already proven quality service specifically in customer service where chatbots are now being implemented.

According to statistics, 85% of customer service in 2020 can be managed without human intervention. Plus, chatbots are expected to be the top consumer applications of Artificial Intelligence over the next 5 years. Thing is, even today, huge companies are making way for chatbots to manage particular customer interactions. An impressive example of this is Nordstrom’s chatbot, which provides gift guides and shopping lists around the holidays to help users manage their shopping and ultimately, give them ideas for the best presents available in their store.

Moreover, it is a fact that chatbots makes it convenient for users to communicate with brands and definitely chatbots are helpful for most businesses in specific matters as attracting new customers and in treating their loyal customers right. So why wouldn’t they?

Given these points, it’s evident that the era of chatbots is a threat to the call center industry: it is cost-saving and efficient in particular factors that most agents would work into. While it may be unfortunate for most call center service businesses, the leeway that veterans found to make their way around this is to migrate to high end jobs – which chatbots may not be able to do, at the moment.