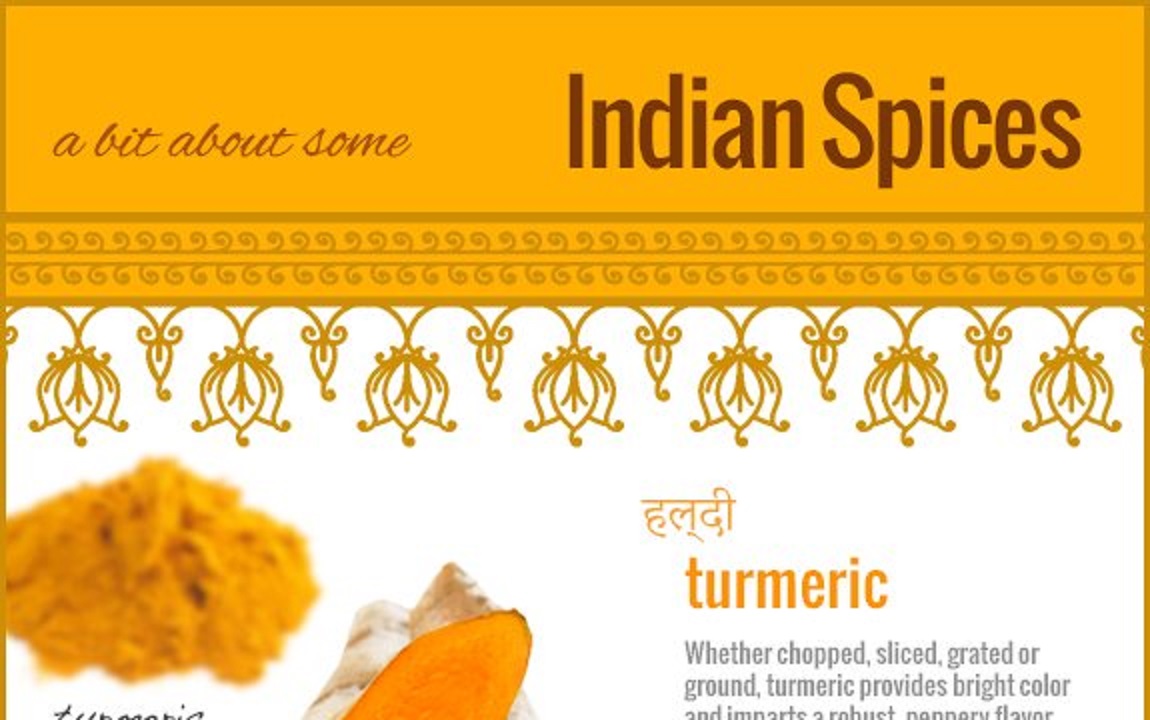 Whether chopped,sliced, grated or ground, turmeric provide bright color and imparts a robust, peppery flavor ad aroma with a hint of aged wood.

It provides the characteristic golden color of curies and dhal, a type of stew made from hulled, split lentils or peas Turmeric is also featured in Indian chutney, piccalilli and kedgeree (pickles), as well as in rice, vegetable and seafood dishes.

Cardamom is a member of the ginger family known for its unique flavor and aroma, which can be described as smoky, floral, citrus and sweet all at the same time.

Many traditional Indian dishes feature different varieties of cardamom. Elettaria, or green cardamom, is combined with condensed milk and sugar to make sweets collectively referred to as mithai. Green cardamom is also used to flavor coffee and teas, most notably Masala chai.

Though coriander is the dried, brown seeds of the cilantro plant it doesn’t taste anything like the herb. in fact, the seeds taste like burnt orange when toasted but are mildly sweet when ground as a spice.

Coriander is a staple in Indian cuisine. It is added whole or ground to chutneys, pickling spice mixtures and is frequently used to season chicken and pork. Often, coriander seeds are combine with cumin seeds and fried “dry” before being powdered.

To add some pungent, warm flavor to your cuisine, try adding on or two whole star anise pods to slow cooking soups and stews. Adding star anise to braising liquids when simmering a chicken or a beef roast is a particularly easy way to get meat that simply falls off the bone and retains its natural juices.

once traded as currency in china and elsewhere this spice has a rich history to accompany its agreeable flavor and smell. its delicate but persistent aroma is warm sweet and woody and its fragant flavor has notes of clove and citrus.

In Indian cooking cinnamon is used in many different masalas (spice mixes) as wells condiments such as chutneys and pilafs.

A pungent sweet spice with a similar aroma to mace the spice with which it shares a botanical name. Nutmeg is more pine-like than mace and is used in very different ways in cooking. the flavor is arm and has hints of clove as well as a discreet bittersweet woody flavor. it is sweeter than mace but it is also a component of many savory dishes.

It combines well with cardamom cinnamon cloves and coriander and flavors Moghul (Northern Indian) dishes like pilafs and birani: kebabs and koftas.

Saffron’s violet lily-like flowers contain three yellow-orange stigmas. used as a dye, spice, and perfume, saffron stigma have been in great demand since ancient times. It takes about 75000 flowers to yield 1 pound of saffron hence its position as the world’s most expensive spice.

Fortunately only a small amount is required in cooking, as larger amounts will yield a bitter taste instead of the pleasant subtly sweet earthly taste it imparts in smaller quantities. It has a unique rich pungent smell and combines well with anise cardamom cinnamon, nutmeg and others. it flavors savory dishes such a Moghul biriani (meat and rice dishes) as well as sweet kulfis ( a kind of Indian ice cream).

The Clove tree is an evergreen tree that grows up to 50 feet. the clove tree is pyramid shaped and strongly aromatic. Twice each year unopened flower buds can be picked and dried. The dried flower buds are called cloves.

In cooking they should be used sparingly as they will assert their pungent sharpness over other flavors. Cloves are essential to garam masala the spice blend that is featured in many Indian dishes.

The Pungent earthy aroma of mustard seed begins to be notice on grinding, though mustard seed is rarely used in its powdered form in Indian cooking. Brown mustard seeds are prominent in southern Indian cooking where they are commonly fried in oil so as to infuse a nutty taste without heat.

In a process called tempering mustard seed, curry leaves, cumin and asafetida are fried in very hot oil (carefully watching that the mustard seeds don’t escape) and added to dishes before serving.

Cumin seed refers to the seed of Cuminum cyminum, an annual herd related to parsley, dill and caraway. Like other members of the Umbelliferae family, the plan bears a fruit that contains a single, oblong-shaped, highly aromatic seed.

Cumin seeds are most often used dry roasted which reduces some of its natural bitterness and draws out its nuttiness. Alternatively they are often fried in oil when used whole.

It is used in curry powder and masala, and its pairing with coriander it what gives much Indian foots its characteristic aroma.