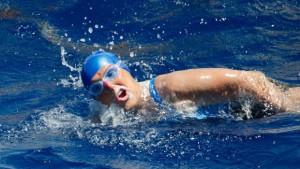 Congratulation for Diana Nyad. This morning Monday 2nd of august 2013 Diana Nyad finished a dangerous and long swim from cuba to florida a distance of 103 miles. According to her official Twitter Account Diana finished the distance in 52 hours, 54 minutes, and 18.6 seconds.

Long-distance swimmer Diana Nyad made history Monday, becoming the first person to swim the 110 treacherous miles from Cuba to Florida without a shark cage — at the age of 64.

Crowds of fans, cheering and blowing conch shells, waded into the water to greet a sunburned Nyad as she approached the shoreline of Key West just before 2 p.m. with a Coast Guard escort after nearly 53 hours in the Florida Strait.

“I’m beaming with pride,” Nyad told NBC News as supporters mobbed her stretcher before she was taken by ambulance to a hospital for evaluation.

“Never give up,” she told a well-wisher, according to NBC Miami.

This was Nyad’s fifth try since 1978 — and she had a few strokes of luck: favorable currents and fewer of the poisonous jellyfish that helped doom an earlier attempt, according to updates from her website and Twitter feeds.

The swim was not without extreme challenges, however.

Nyad was so cold on Sunday night that her handlers didn’t stop to feed her, figuring she would stay warmer if she kept going.

Her tongue and lips were swollen by sun and seawater, and she had abrasions in her mouth from a special silicone mask meant to keep the jellyfish at bay.

At two miles out, Nyad seemed to realize that she was on the cusp of success and she paused to thank assistants gathered on 10 boats. 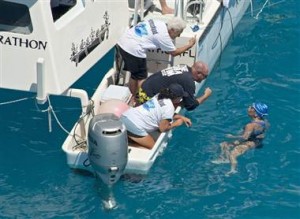 “I am about to swim my last two miles in the ocean,” she told her handlers as she closed in on Key West, according to the blog.

“This is a lifelong dream of mine and I’m very very glad to be with you,” she added, praising her team. “So let’s get going so we can have a whopping party.”

The Florida Strait has been conquered only once, by Australian Susie Maroney, who used a protective cage during a 1997 swim.

Just this past June, Australian Chloe McCardel abandoned an attempt after 11 hours when she was badly stung by a jellyfish.

Nyad — who swam around the island of Manhattan in 1975 and a from the Bahamas to Florida in 1979 — departed on Saturday morning and arrived a day earlier than original estimates.