This page introduces you to JSON – JavaScript Object Notation. We have discussed definition, history, usage and Comparison with XML of JSON in this page.

You can read and write JSON easily.

It is entirely language independent and can be used with most of the modern programming languages.

A simple example of JSON

The above example shows information about three students – their name and major subjects are stored using JSON. 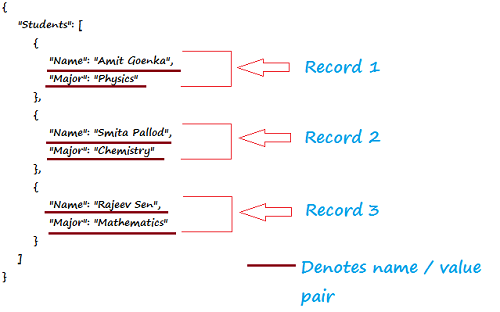 The name behind popularizing the JSON is Douglas Crockford. He used JSON is his company State Software around 2001.

Today, JSON is one of the most widely used data-interchange format in web, and supported by most of the Web APIs (like twitter api) to fetch public data and creating applications out of them.

Various Web Services and APIs use JSON format to provide public data. Using the associated Service / API, you can fetch that data and use it to create applications.

For example, if you click this link, you would get user information about ‘logicum_co’ in twitter and last two tweets of the user.

If you look the available data closely you will see meaningful information in a very structured way.
JSON format (or a close derivative of that) is used by various NoSQL databases to store data. For example MongoDb, CoucheDB uses JSON format to store data.

This is a simple document (as record in SQL) stored in MongoDB. MongoDB uses BSON (a derivative of JSON) format to store data.

Since both JSON and XML are mean to be a data interchange format, there is always a comparison between JSON and XML.

The similarity between them lies in the points that, both of them are plain text, human readable and can be used with most of the modern programming languages.

But unlike XML, JSON supports data structures (name/value pairs and ordered list of values) which are universal in nature and supported by most of the modern programming languages in some form or other. Which makes JSON more comprehensible, easy to get started with (because you already know the format if you familiar with one or more modern programming languages) and thus easy to use.

Experiences of developers say that JSON is faster that XML.

XML is redundant in nature. Unlike JSON.

What you will learn in webfunda JSON tutorial

Structure and datatypes of JSON.

Working with JSON and PHP.

Working with JSON and JavaScript.

After reading this tutorial, you will gain knowledge to use JSON in practice..

In this page you will learn about structures of JSON. you will also learn different forms of storing data in JSON.

An ordered list of values. In various programming languages, it is called as array, vector, list, or sequence.

Since data structure supported by JSON is also supported by most of the modern programming languages, it makes JSON a very useful data-interchange format.

JSON supports an array of data types. We will discuss those in detail in the following section of this page of the JSON tutorial.

In JSON, objects can nest arrays (starts and ends with ‘[‘ and ‘]‘) within it. The following example shows that.

An Array starts and ends with ‘[‘ and ‘]‘. Between them, a number of values can reside. If there are more than one values reside, they are separated by ‘,’.

If the JSON data describes an array, and each element of that array is an object.

Remember that even arrays can also be nested within an object. The following shows that.

A value can be a string, a number, an object, an Array, a Boolean value (i.e. true or false) or Null. This structure can be nested

A string is a sequence of zero or more Unicode characters, enclosed by double quotes, using backslash escapes. A character is represented as a single character string, similar to a C or Java string.

Whitespace can be placed between any pair of supported data-types.

This document provides you with some JSON Example. Examples are associated with XML, MySQL, MongoDB and APIs to add more value. Instead of just writing the JSON code as examples, we thought that it would be of more value to you if we co-relate the examples with those.

If you want to read about various formats JSON can be stored with, you may refer JSON Data Structure.

The following is an example of a JSON document. Bellow that. the XML format of the same document is given.

The following is a MySQL table. Using the PHP-MySQL code bellow the table, we have created a JSON document.

PHP MySQL code to extract data from MySQL table and display as JSON. 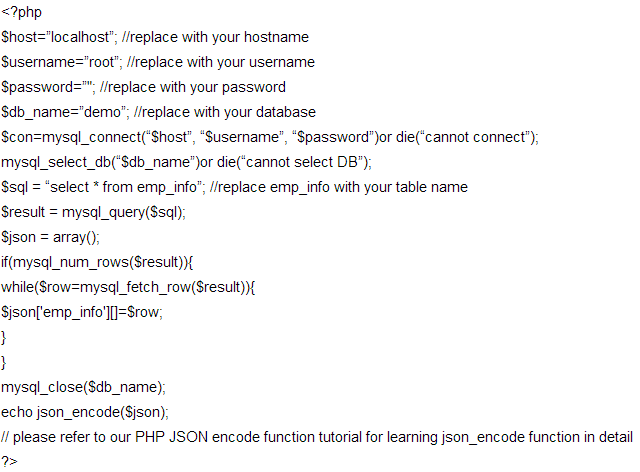 tumblr.com is messaging platform. It offers an API to retrieve data. Here is a simple command to retrieve blog information. For the sake of simplicity, we have kept authentication method out of the scope of this document.

Where “web-development-and-seo” is the blog name from where you want to retrieve data. When browser is pointed to this URL, we get following output, which is in JSON format.

In this page you will learn about installing JSON in PHP and about PHP json_decode() function with realworld examples.

PHP 5.2.0 supports JSON out of the box. So, when you install PHP, JSON support is automatically installed and you don’t need any installation and configuration in addition.

If your PHP version is less that 5.2.0, you can run the following command on RHEL5/CentOS5 Linux.

JSON supports three PHP functions : json_decode, json_encode and json_last_error. We will discuss all of these functions with examples in the following section of this page.

json_decode() function decodes a JSON string. Suppose you have obtained some data in JSON format and you want to convert it into PHP variable for the purpose of presenting that data to user or use it for further programming, you have to use this function.

json_decode() function returns an supported PHP type. If the available JSON string can not be decoded or if the encoded data is deeper than the recursion limit, it returns NULL. Values true and false are returned as TRUE, FALSE.

Note : As far as you are connected to the internet, you can run the above code from localhost also. Replace Logicum_co with the user name of your choice.

In this page you will learn about PHP json_encode() function with example.

PHP json_encode() function coverts a PHP value into a JSON value. For example, from a PHP array, it can create a JSON representation of that array.

json_encode() function returns a string, if the function works.

Output of the example of PHP json_encode function

In this page you will learn about PHP json_last_error() function with examples.

While working on encoding or decoding JSON, if an error occur, json_last_error() function returns the last error.

json_last_error() function does not have any parameters.

The following table shows the values which are CONSTANTS :

Output of the above example

Working with JSON and JavaScript

In this page you will learn about working with JSON and JavaScript.

1) Loop through json object with javascript

2) Loop through json array with javascript

Why you should not use eval() with JSON

It’s not safe to parse JSON using eval because eval allows much more syntax than JSON. Even it can be extended up execution of arbitrary code, which leaves a big security whole for your website.