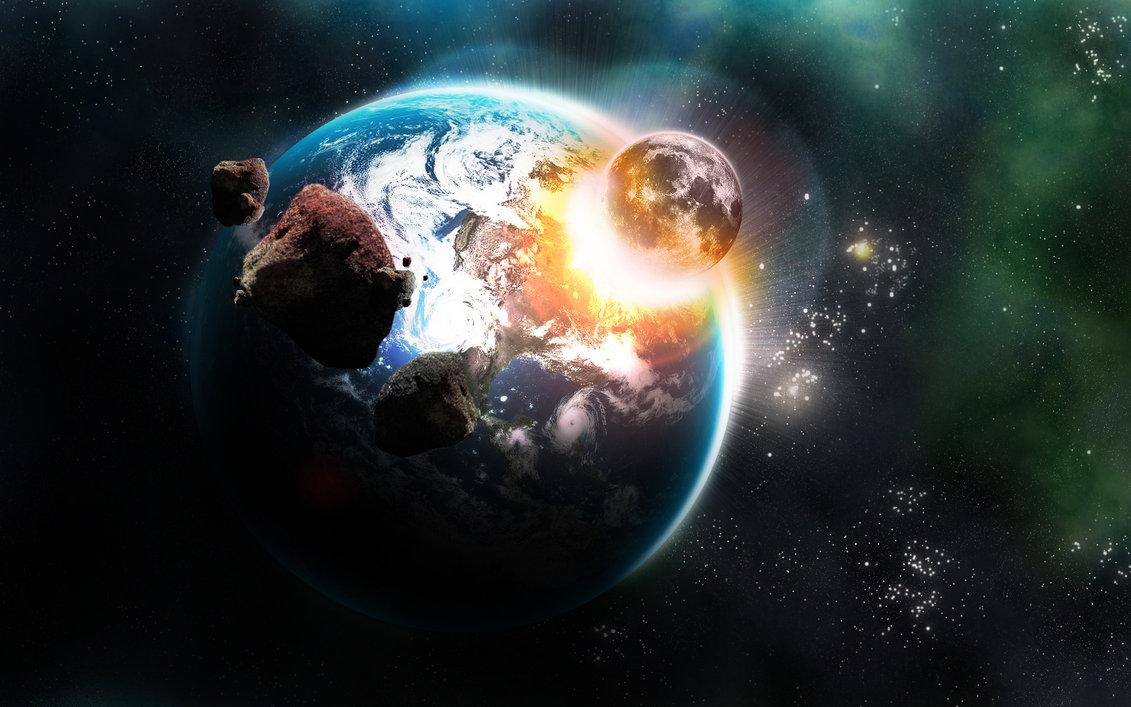 There is a lot of theories talking about the end of the world we list the top 10 of these theories that are the closest to science.

10. Changes in the Sun’s magnetic field will lead to powerful flares.

So what else is new under the sun? The sun goes though a well-documented 11-year sunspot cycle that is driven by its magnetic field entangling, reforming and flipping polarity. Yes, the peak of the next cycle is in 2012 (or 2013), and some predictions suggest it might be 30 to 50 percent stronger than the last peak.

But experts say it will certainly not be the biggest peak ever recorded.

The bottom line is that no dragon’s breath of flame will stretch across 100 million miles of space and blowtorch Earth. The largest solar flare recorded to date, on Nov. 4, 2003, spewed several billions of tons of plasma in Earth’s direction. The flare’s X-ray radiation that impacted our protective atmosphere had the equivalent radiation of 5,000 suns.

9. The Earth’s magnetic field will reverse.

Don’t hold you breath. The last field reversal happened nearly 800,000 years ago. Fred Flintstone and our other ancestor cavemen survived. Geological evidence shows that the field has reversed its orientation tens of thousands of times over Earth history. Yet there is no definitive evidence that a magnetic field reversal has ever caused any mass extinction due to increased cosmic ray influx.

8. The Earth’s rotation axis will tip.

This isn’t nearly as easy as tipping cows. Unlike Mars, which does go though wide excursions in it axial tilt, Earth’s tilt is kept steady by the gravitational influence of the moon. An object the size of Mars would have to hit Earth to transfer enough momentum to knock us out of kilter. But Mars-sized protoplanets were kicked into interstellar space over 4 billion years ago. The solar system doesn’t make “planets-gone-wild” anymore.

7. A grand alignment of Jupiter and Saturn will gravitationally perturb Earth.

For the past several decades there have been doomsday claims that the combined gravity from grand planetary alignments will cause geologic and meteorological upheavals on Earth.

In 1962 an extremely rare grand conjunction of the classical naked-eye planets drove astrologers crazy. The conjunction happened on Feb. 4-5 and was accompanied by a solar eclipse! The most infamous grand conjunction was in 1982 and popularized in a book called “The Jupiter Effect,” which predicted earthquakes and massive tides. Life went on as usual both years. The moon has a vastly greater gravitational influence on Earth than Jupiter. It’s called location, location, location! At a whopping distance of 400 million miles from Earth, Jupiter’s tug is pretty wimpy.

6. The Sun will align with the galactic equator on the winter solstice.

So what? These are simply coordinates in the sky. It has no physical reality any more than the intersection of Broadway and 7th Avenue at Times Square influences the geology of Manhattan Island. This is greatly confused with the fact that the sun’s position actually oscillates up and down as it orbits the galaxy, like a horse on a carousel.

We pass through the galactic plane every 35 to 40 million years. It’s possible that an increased number of comets might be hurled towards the Earth because of gravitational interaction with the densest parts of our galaxy during this passage. But we are talking about the consequences spanning many thousands of years, not crashing down on our heads in any one specific year.

5. The black hole in the galactic center will affect us.

4. An asteroid will smash into Earth.

A threatening near-Earth asteroid that’s gotten the most press is the 900-foot wide Apophis. But its chances of collision have been downgraded to 1 in 250,000 at its next close approach in 2029. In theory, an uncharted asteroid or comet could come out of the blue tomorrow. But if we don’t know about it today, the Mayans certainly didn’t know about it 1,200 years ago. Earth-killer impacts are tens of millions of years apart. So there’s no reason to be a doomsday clock-watcher.

3. The rogue planet Nibiru will swing by Earth.

There isn’t such a planet any more than the planet Naboo from the Star Wars trilogy is real. Purported Internet pictures of the interloper are photographic lens flares or hoaxes. Don’t believe every dot you see photographed in the sky.

2. Supernovae or hypernovae will irradiate Earth.

There are no stars that are so close to Earth that radiation from their supernova demise would seriously affect us. The nearest candidate, the red giant Betelgeuse, is predicted to explode in the next 1,000 years. The monster star Eta Carinae is also on a short fuse. Neither doomed star has a spin axis precisely aimed at Earth, so we don’t have to worry about being fried by a narrow beam of gamma rays ejected from the core’s implosion. In fact the kinds of stars that shoot out these Death Star beams are uncommon in the Milky Way. Earth has a one percent chance of getting zapped over 10 billion years. Scratch gamma ray bursts off of your homeowner’s insurance policy.

1. A cloud of negative energy engulfs the solar system.

Wow! A dark cloud with a bad attitude! This sound suspiciously like a Star Trek episode. Dark energy is all around us already, but it is not packaged into clouds. The same goes for dark matter.