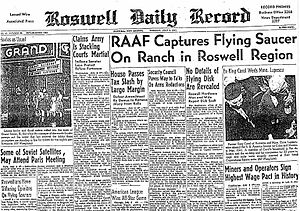 The Roswell UFO incident took place in the U.S. in 1947, when an airborne object crashed on a ranch near Roswell, New Mexico, on July 7, 1947. Explanations of what took place are based on both official and unofficial communications. Although the crash is attributed to a U.S. military surveillance balloon by the U.S. government, the most famous explanation of what occurred is that the object was a spacecraft containing extraterrestrial life. Since the late 1970s, the Roswell incident has been the subject of much controversy, and conspiracy theories have arisen about the event. END_OF_DOCUMENT_TOKEN_TO_BE_REPLACED