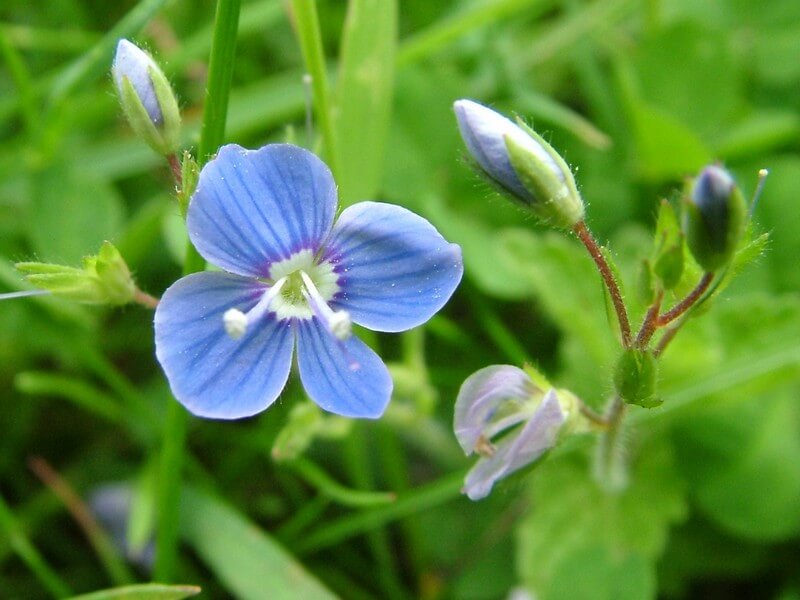 Speedwell is a much decorated herb, having as many names as it does medicinal properties.

When the Romans wanted to pay you a compliment, they said you were as useful as speedwell, which  generally meant you had many good qualities.

The reasons for speedwell’s early popularity is tied to its ability to counter visible conditions such as various skin disorders. When the people could see how effective the herb was in combating skin disorders which would normally confine people to a very isolated existence, they began to attribute to it claims for cures that, unfortunately, don’t stand up to the rigours of modern investigation.

However, there is a lot that speedwell can do which is deserving of applause, because while garlic is currently receiving plenty of publicity as a counter to cholesterol, speedwell is the quiet achiever in this particular battle and an increasing number of herbalists are recommending this tenacious herb as an agent in this modern war.

Speedwell can be used very successfully in conjunction with other herbs as a blood cleanser and when combined with stinging nettle, it makes a simple and effective remedy for chronic eczema and is particularly effective against senile pruritus (itching in the aged, due to degeneration of the skin) . Its gentle action is welcomed by old and weak people while a bonus is its ability to stimulate digestion .

If you have a job or a pastime which requires a lot of mental effort you would do well to invest in speedwell as it has an enviable reputation as a memory aid.

Some herbalists use speedwell primarily for respiratory problems. It is an expectorant and will relieve old, dry bronchitis. For chest complaints, speedwell may be used with thyme and plantain, and if your taste buds demand it, you may sweeten the concoction with honey.

For jaundice, liver and spleen disorders, speedwell may be used with dandelion roots and chicory while people who suffer from rheumatism and gout should try the speedwell tincture.

But where it really stands alone is in its capacity as a healer of skin disorders. If you suffer from acne or any other skin disorder, make up the following mixture: 30g speedwell, 30g dandelion, 30g plantain, 30g stinging nettle, 30g walnut leaf and 30g wood sorrel. Make a hot infusion of the mixture and drink three to four cups a day.