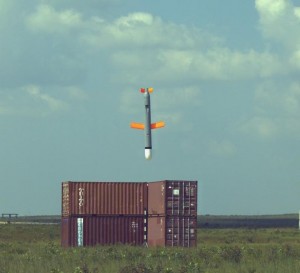 Tomahawk is an all-weather submarine or ship-launched land-attack cruise missile. After launch, a solid propellant propels the missile until a small turbofan engine takes over for the cruise portion of flight. Tomahawk is a highly survivable weapon. Radar detection is difficult because of the missile’s small cross-section, low altitude flight. Similarly, infrared detection is difficult because the turbofan engine emits little heat. Systems include Global Positioning System (GPS) receiver; an upgrade of the optical Digital Scene Matching Area Correlation (DSMAC) system; Time of Arrival (TOA) control, and improved 402 turbo engines.

The Tomahawk land-attack cruise missile has been used to attack a variety of fixed targets, including air defense and communications sites, often in high-threat environments. The land attack version of Tomahawk has inertial and terrain contour matching (TERCOM) radar guidance. The TERCOM radar uses a stored map reference to compare with the actual terrain to determine the missile’s position. If necessary, a course correction is then made to place the missile on course to the target. Terminal guidance in the target area is provided by the optical Digital Scene Matching Area Correlation (DSMAC) system, which compares a stored image of target with the actual target image. 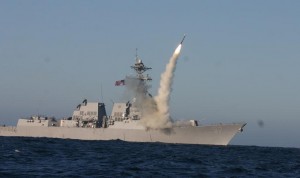 Two submarines and a number of surface ships fired Tomahawk cruise missiles during the Gulf War. According to initial US Navy reports, of 297 attempted cruise missile launches, 290 missiles fired and 242 Tomahawks hit their targets. But TLAM performance in Desert Storm was well below the impression conveyed in DOD’s report to the Congress, as well as in internal DOD estimates. During Desert Storm, a TLAM mission was loaded 307 times into a particular missile for launch from a Navy ship or submarine. Of those 307, 19 experienced prelaunch problems. Ten of the 19 problems were only temporary, thus these missile were either launched at a later time or returned to inventory. Of the 288 actual launches, 6 suffered boost failures and did not transition to cruise. Despite initial strong positive claims made for TLAM performance in Desert Storm, analysis of TLAM effectiveness was complicated by problematic bomb damage assessment data. The relatively flat, featureless, desert terrain in the theater made it difficult for the Defense Mapping Agency to produce usable TERCOM ingress routes, and TLAM demonstrated limitations in range, mission planning, lethality, and effectiveness against hard targets and targets capable of mobility.

The Gulf War and subsequent contingency operations, including the September 1996 attacks on Iraqi military installations, demonstrated that long-range missiles can carry out some of the missions of strike aircraft while they reduce the risk of pilot losses and aircraft attrition.